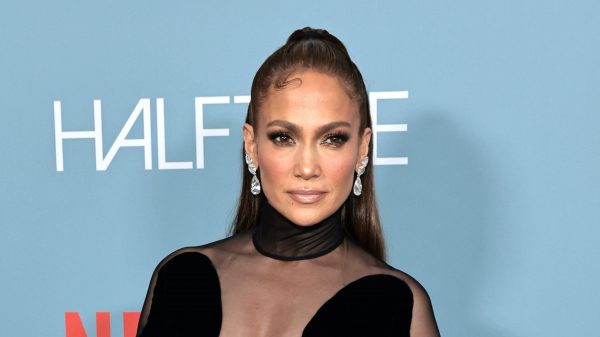 Did you hear the news? Jennifer Lopez says, "Happy Pride," everyone. During a recent performance at the sixth annual Blue Diamond Gala — hosted by the Los Angeles Dodgers Foundation at the Dodgers Stadium and headlined by none other than J. Lo herself — the multi-hyphenate brought her 14-year-old child, Emme, up on stage for a surprise performance and used gender-neutral pronouns "they/them" to introduce them to the lucky crowd.

J. Lo shares twins (Emme and Max) with her ex-husband Marc Anthony, and according to Buzzfeed, this was not the first time that Emme has blessed fans with their voice. In fact, it's not even the first time they've performed with mom during a big stadium show; they duetted the song "Limitless" in 2019, and also made an appearance during the 2020 Super Bowl. You could say they're practically a pro by now.

"The last time we performed together was in a big stadium like this and I ask them to sing with me all the time, and they won't. So this is a very special occasion. They are very, very busy. Booked. And pricey," Lopez said, according to Entertainment Weekly. "They cost me when they come out. But they're worth every single penny because they're my favorite duet partner of all time. So if you will indulge me."

Fans posted clips of the show to social media, praising the singer for using gender-neutral pronouns for Emme so effortlessly. And while this may seem (for some) like an easy thing to do, it really does make a huge difference, so it's great that Emme seemingly has such love and support in their life.

Sephora Is Having Free Same-Day Delivery for One Day Only

TikTok Is Obsessed With the Bleach-Washing Hair-Color Trend

No comments to show.